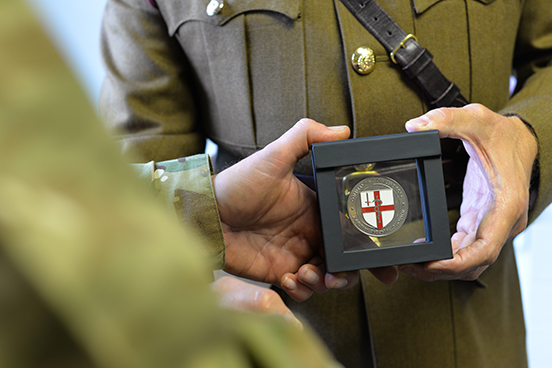 Presentation of a new Commander's Coin.

The tradition with the United States Army is that a Commanders Coin is presented to military personnel in recognition of excellence in competitions. It has evolved now with it's chief purpose promoting pride and to build cohesion and morale.

There are differing accounts of the origins of the Commander's Coin. Robust competition between the US Army, Navy and Air Force — to be the first for almost anything — means any definitive answer is long obscured behind a rivalrous smoke-screen. Legend has it that the antecedent 'challenge coins' began circulating in the drinking bars of Saigon during the Vietnam War (1955-75). There, local coins were over-stamped with a Unit's emblem and were used to prove membership of the relevant military company. Whoever could not produce one were challenged to buy in the drinks, hence the term 'challenge coin'. Of course, these coins were always kept to hand to avoid having to stand for a costly round, and so were much cherished. The impact upon the drinking districts of Vietnam was tangible; non-military drinkers stayed away for fear of having to buy a round of drinks, and so some bars became military-only haunts.

During the Gulf War (1990-1991), the British military worked side-by-side with US-led coalition forces. Close operational ties between the US and the British were further strengthened during the war in Afghanistan (2001 - present). It was during this conflict that British military personnel were awarded US Commander's Coins, which gave rise to the need to reciprocate in kind. British units including the Royal Engineers and the Royal Army Medical Corps developed their own Commander's Coins.

Today a Commander's Coin is often exchanged as a gift of friendship, presented to attached Units or individual soldiers, or to visiting Commanding Officers, Chiefs of Staff, Defence Secretaries and Heads of State. If you watch the President of the US in a televised address from the Oval Office, you will often see a fully stocked Commander's Coin rack on a table immediately behind him.

Captain Sexton, a Permanent Staff Administration Officer (PSAO), had been detailed to commission a Commander's Coin for Colonel Boreham, the Commanding Officer (CO) of 256 (City of London) Field Hospital. Captain Sexton knew that to deliver a Coin his CO would be proud to award, and one that a soldier in his Unit would cherish, he would need the services of a graphic designer. Captain Sexton contacted the only graphic designer he knew (an old school friend) at Atelier Works — and conveniently based just a seven minute walk from the Field Hospital HQ. Coincidently, Atelier were fully aware of the RAMC, having researched the Corps' history for thier Royal Mail Victoria Cross stamps, which features amongst others, Noel Chavasse, RAMC (VC and Bar).

Each of the Atelier partners had fathers in the Armed Services and grandfathers who fought in both World Wars. The partners therefore considered it an honour to be asked to design a Commander's Coin for 256 and agreed to do so, gratis.

After a meeting the CO was happy for Atelier partner Ian Chilvers to prepare some initial ideas. The first step was to look closely at the prevailing design of various existing Commander's Coins. Some examples were acquired, and online collections were surveyed. It was clear that most Coins had been commissioned by individuals who may have found themselves perhaps a little out of their depth. It was also clear that the Army 'doesn't do aesthetics'; just practical delivery, quick and on the double.

By default, it seemed that all Commander's Coins carried the relevant Unit's insignia and a motto. Many were a combination of coloured enameling and mixed metals. As an award, it was felt that the Coins should be one step below an official military medal. So the Commander's Coins that Atelier studied at times were not a true reflection of the heritage and the pride in the organisations they were designed to represent.

Ian asked Captain Sexton what a Field Hospital actually does. He briefly explained the tri-aging, treatment and evacuation processes, from the initial point of wounding, and that the specialist medical staff with the Unit are drawn mainly from the NHS. He explained they are deployed on operations either as part of a formed Unit, individual reinforcements, or as reliefs in place for an already purpose-built Field Hospital.

Highly impressed by the commitment made by these medics, Ian began to wonder whether this Commander's Coin could in some small way pay tribute to such dedication — and even assist in teaching battlefield medical procedure.

"What is the most important thing soldiers should do when they reach a casualty?" Ian asked Captain Sexton. "Follow the Master Drill!" he barked in response. Then, remembering that Ian was a 'civy', he went on patiently to outline the Master Drill; standard battlefield training for all military personnel."You have to drum this into a soldier time and time again", he said. "In a fire-fight, you stem the bleeding and then check airways. After the fire-fight you triage, and then communicate with others to arrange evacuation while maintaining the stability of the casualty. In! That! Order!"

Ian felt he'd stumbled upon a purpose for the 256 Commander's Coin.

The Coin features the 256 insignia; the rod of Asclepius (the staff and the snake) overlaid upon the City of London shield. Surrounding the shield is the legend 'Commanding Officer's Coin' and '256 (City of London) Field Hospital'. This is set in the typeface Albertus; significant because it was designed by the pre-eminent type designer Berthold Wolpe, who lived very close to the 256 Regimental Headquarters in Walworth. Many of the surrounding street signs (also designed by Atelier Works) are set in Albertus. The typeface is closely associated with the local community and so is the new Commander's Coin.

The design of a new Commander's Coin.

The design of this Coin's front face is (quite intentionally) similar to other Commander's Coins, but has been kept very simple and very legible. The reverse face is more unconventional, because it features a medic applying a tourniquet to a battlefield casualty.

The image was created by staging the scene in the unit's Drill Hall, using personnel from 256. Close attention was paid by Atelier to the correct battlefield clothing and equipment, and — most important of all — careful positioning of the soldiers, so that they created a strong outline, which could be easily recognised in miniature. Live viewing of photographs on a laptop helped Atelier direct the poses so that they worked in a circular format. It is noted that the Red Cross armband is on the right arm and not, as convention has it, on the left. This was done for narrative reasons. 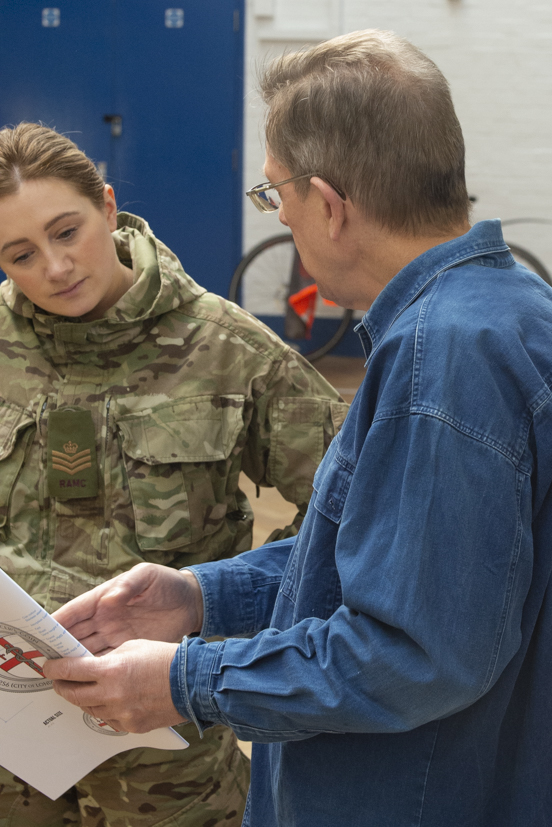 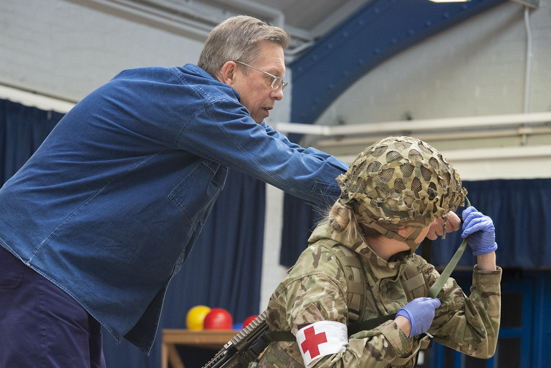 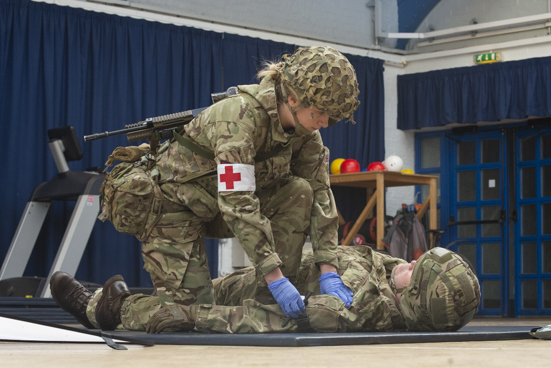 Back in the studio, the final image was manipulated to edit out extraneous detail, to highlight other features so that they would be recognised in bas-relief and a foreground was added. Finally, the key points of the Master Drill — as emphasised by Captain Sexton — were added around the perimeter of the Coin. 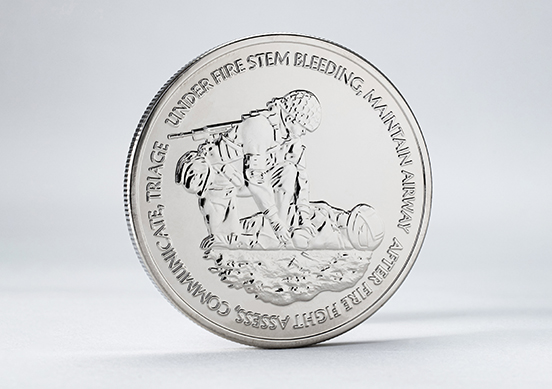 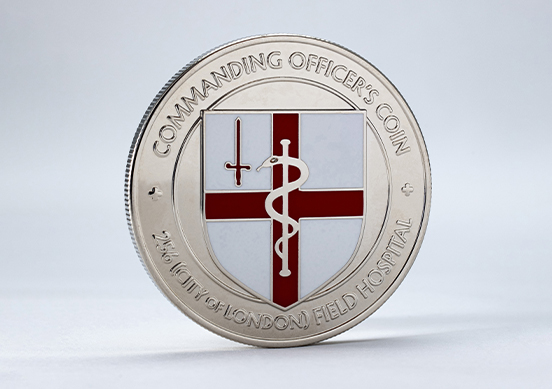 From stamped coins in Vietnam, to one-upmanship coins post-Afghanistan, the Commander's Coin has certainly evolved. Now the CO of 256 (City of London) Field Hospital has an appropriate Coin that links the local community with an extremely practical, instructive, and indeed potentially life-saving message embedded into its design.