King's College London aims to be 'a civic university at the heart of London'. It has invested heavily in the new Science Gallery London (SGL); a space where students, academics and the public can discover the university's cutting-edge research, collaborate with artists, and work with cultural organisations. SGL is a strategically important project for King's, linking the university to local communities and helping to drive innovation in the heart of the city.


SGL is part of Guy's Campus in south London and occupies the Grade II* listed East Wing — once part of the original 18th-century Guy's Hospital. Ironically, until recently this site housed the first McDonald's in Europe on a healthcare campus. The opportunity to replace the fast food outlet with something more mentally nutritious spurred on the project.

Three floors of the building have been gutted and redesigned to create new public spaces; a whole floor dedicated to changeable exhibitions, a lecture theatre, a shop, a health food café, and hospitality facilities make it one of London's newest and most stimulating venues.

SGL focuses on interacting with 15 to 25 year-olds, introducing them to new research and innovative thinking from across the university. It is both a 'shopfront' for King's and a 'bridge' to a possible career in medical sciences. 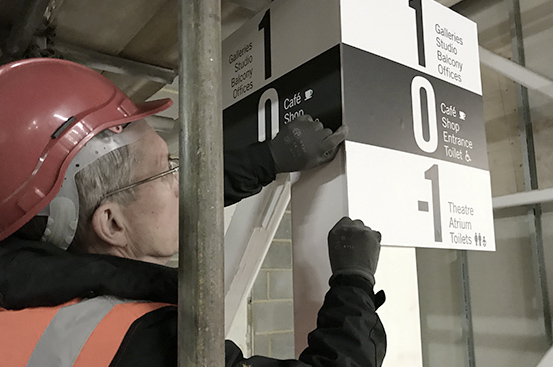 Atelier were commissioned to prepare a wayfinding strategy for the new venue. We started work very early, conducting sight-line tests during the building clearance phase. In some instances (above), we had to work around scaffolding obstructions and test signs on walls that just didn't yet exist. 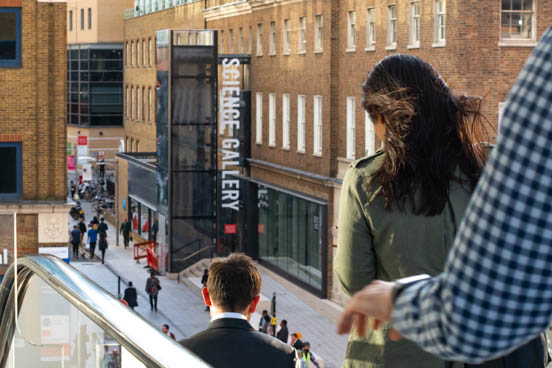 Our first challenge was to identify the venue from the outside. A new entrance was opened up on Great Maze Pond Road, a busy pedestrian route on the way to Guy's Hospital. SGL's long-term viability rests on the venue being immediately recognised. As most visitors would emerge from the nearby London Bridge transport terminus, we negotiated with the planning officers to permit high-visibility lettering to be applied to the new external lift tower. Its prime position on Great Maze Pond Road ensures SGL is also seen from the neighbouring Shard, one of London's most popular tourist attractions. Eleven metres of lettering runs the length of the external tower, making it very visible — even at night. 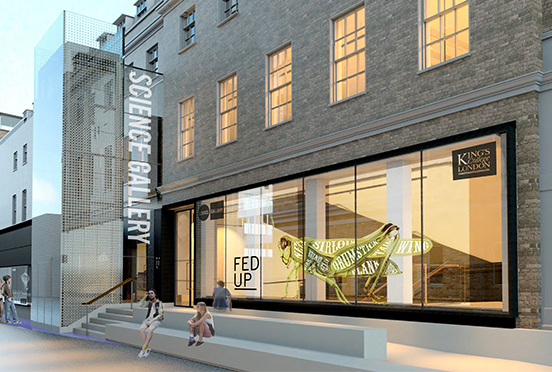 Early concepts showing the use of SGL glazing to promote current exhibitions.

The next wayfinding task was to encourage public entry. The architects inserted a large glass facade into the side of the building, making the shop and parts of the café visible from the street. However, nothing could be seen of the exhibition on the floor above. Our early concepts showed SGL how to use their new window to promote current exhibitions. 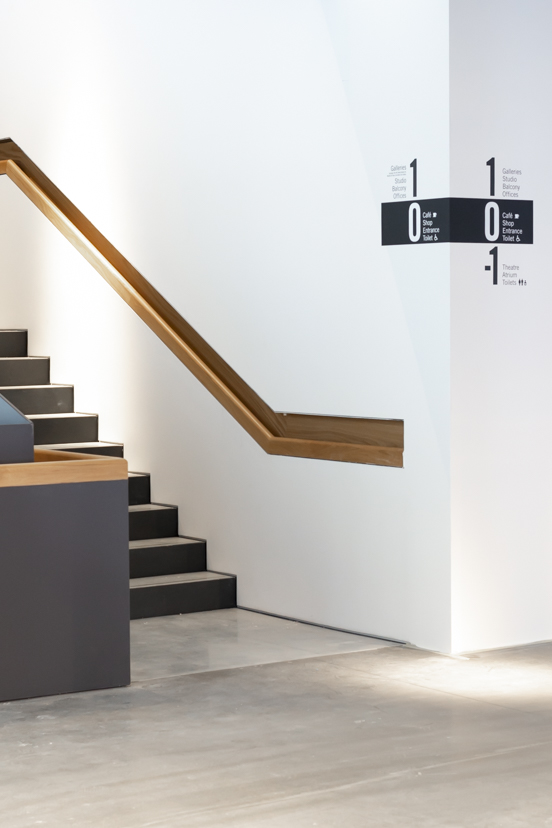 Internal wayfinding is minimal and signs are mainly positioned around the central stair core. Appearing on corners, they are a visual representation of 'where art and science collide' — a coming together of two disciplines. Large floor numbers were applied to the walls, adjacent to the lifts. They serve as orientation points for visitors; providing them with a location to return to when they've finished looking at an exhibition. Two of the three floors are open spaces so the wayfinding is functional, restrained, and does not visually compete with the exhibitions. Pictograms are used for facilities. By reducing the sign content to the minimum, the wayfinding is easily understood. All other SGL signs are simply applied. They do not need to draw attention to themselves but merely present a calm authority on the fringes of visually rich exhibitions. 'Back of house' signs follow the same style as the public areas and are applied directly to wall surfaces. External boundary signs were designed to be carefully affixed to the heritage listed ironwork.