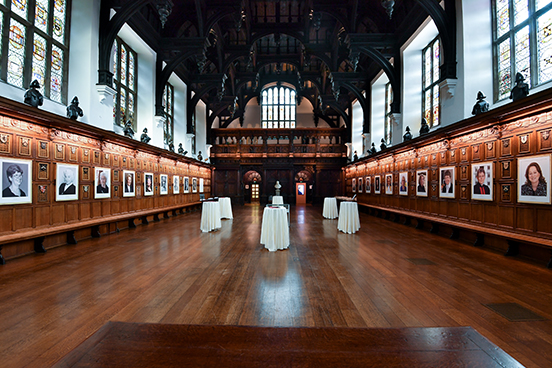 The Honourable Society of the Middle Temple, commonly known simply as Middle Temple, is one of the four Inns of Court exclusively entitled to call their members to the Bar of England and Wales as barristers. The Temple was once the home of the Knights Templar. 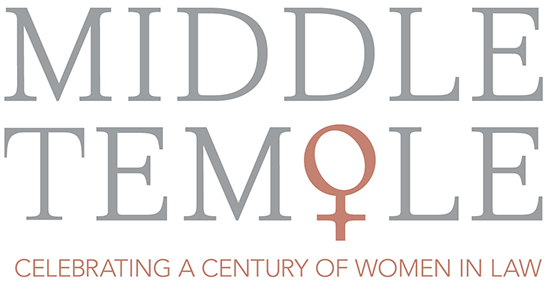 Middle Temple, Celebrating a Century of Women in Law was an exhibition of trail-blazing women barristers installed in Middle Temple Hall. It marked 100 years (1919-2019) since the first woman was admitted to an Inn of Court. Until that time, women were excluded from being solicitors, barristers, judges and even jurors. 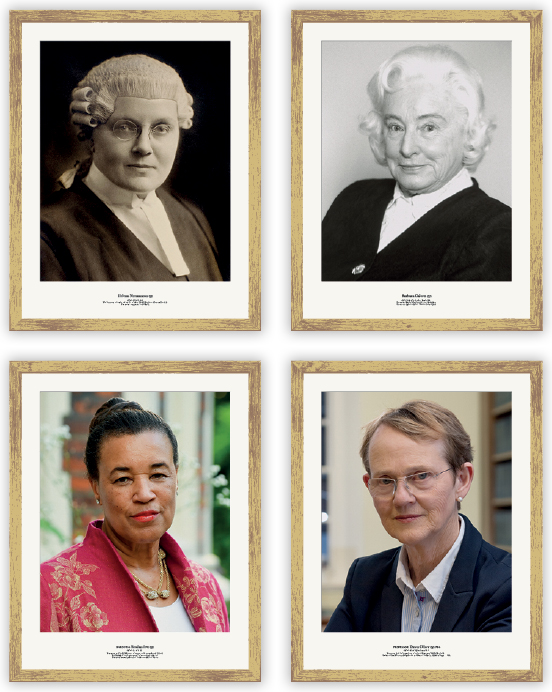 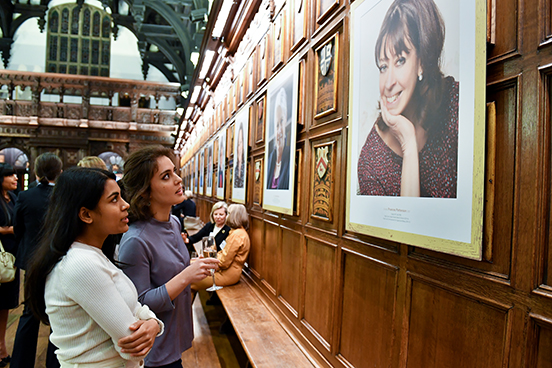 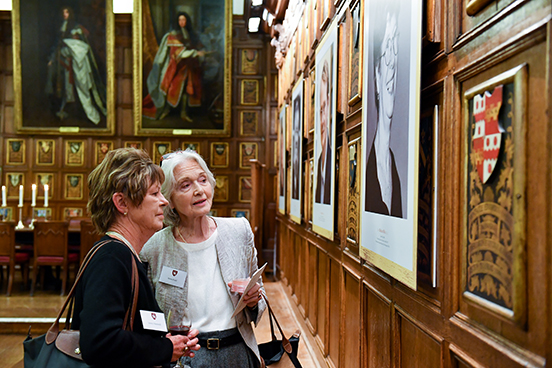 
Middle Temple Hall stands at the heart of the Inn. Dating from 1572, it survived the Great Fire of London and the Blitz, and its medieval double-hammerbeam roof is considered the finest in London. On the main wall hang portraits of monarchs by Van Dyke and Kneller, while the oak-panelled side walls are adorned with the heraldic plaques of past Readers (senior members appointed to deliver a reading in the Hall). The oldest plaque dates from 1597. 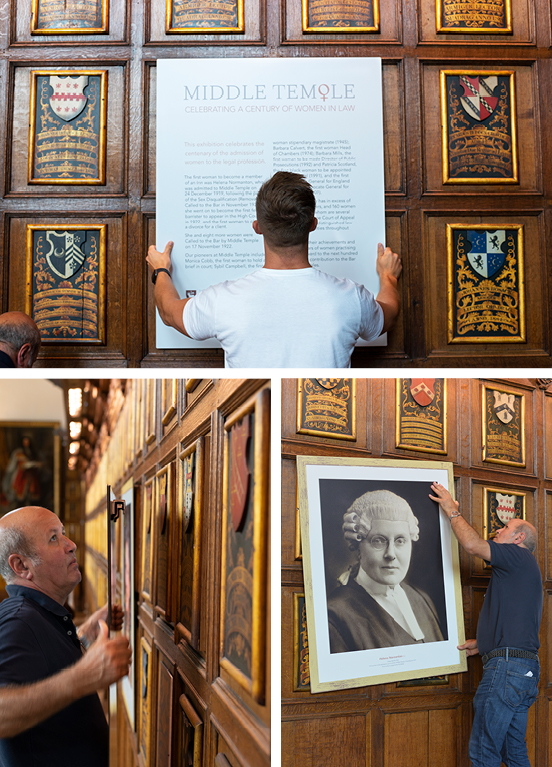 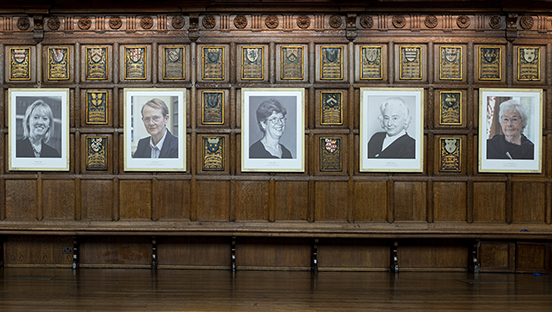 The listed 16th-century Hall presented many installation problems. The exhibition included 25 portraits (114 × 86cm) carefully hung from the Readers' plaques. These had to be painstakingly remounted and brought forward by the Inn's carpenter, leaving a small gap for a specially developed hook affixed to the back of each portrait. The wood-panelled walls were not straight and a great deal of trouble was taken to space all the portraits so that they hung level.

The Hall was also used for other functions, and so the exhibition had to be designed for rapid and easy dismounting, storage, and then reinstalling. This constant re-hanging meant that the portraits had to be robust and lightweight; and to comply with building regulations, they had to be fireproof. Atelier prototyped a high-quality digital print method, printing directly onto an aluminium composite sheet. 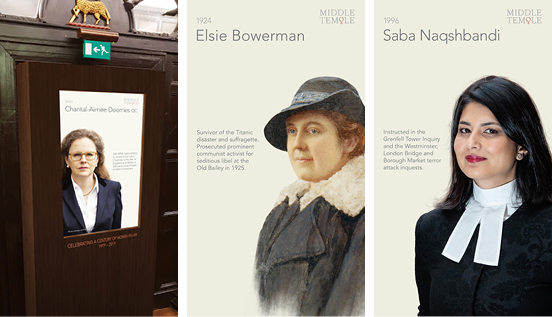 Supplementing the exhibition was a seven and a half minute digital display featuring a further 40 women barristers, whose careers spanned the 1960s to the present day. Without the option of attaching anything to the listed woodwork, a special cabinet with an inset plasma screen was designed and seamlessly inserted into an existing doorway. 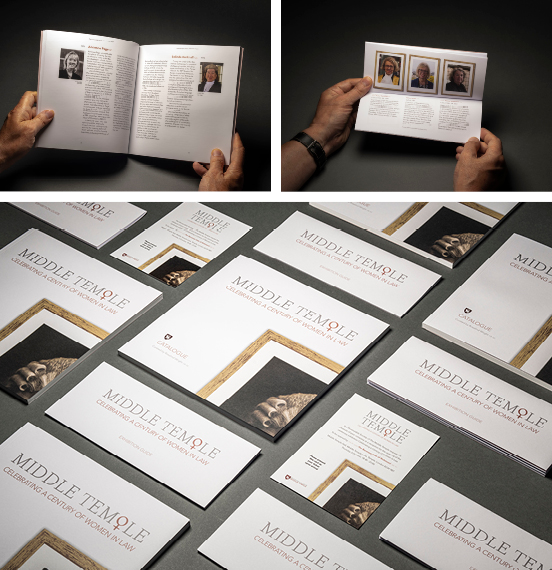 A comprehensive 74-page exhibition catalogue was published as a centenary record, and a handy pocket-sized guide was also produced for visitors. 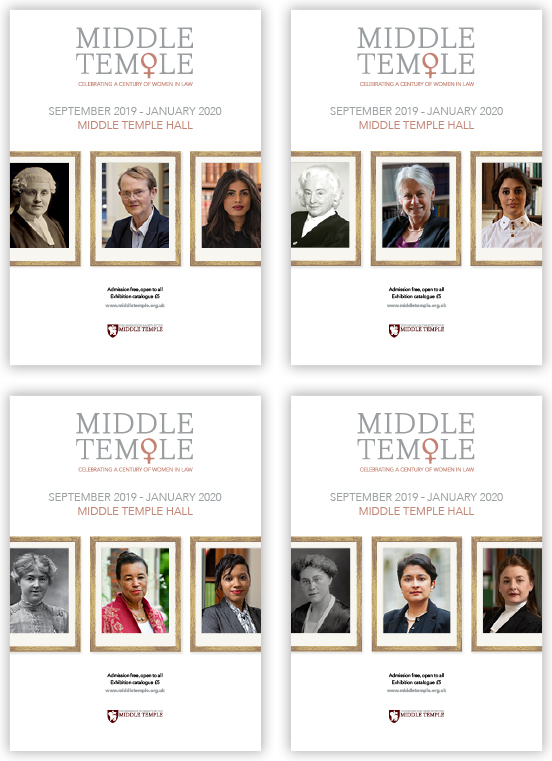 Large-format digitally printed posters, each featuring a different sequence of portraits spanning the century, were installed across Middle Temple. 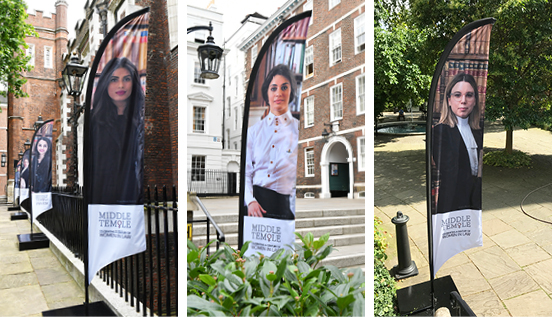 Not forgetting the future, Atelier also encouraged Middle Temple to include women pupils currently in residence at Chambers at the Inn. Six ambitious pupils featured on banners outside the Hall. 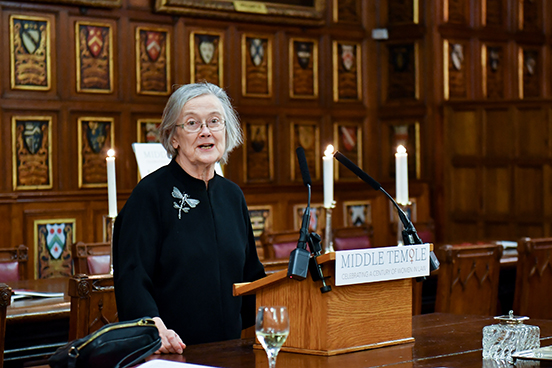 Just a week after Baroness Hale, President of the Supreme Court of the United Kingdom, ruled that the prorogation of Parliament was 'unlawful, void and of no effect', the Baroness opened 'Middle Temple, Celebrating a Century of Women in Law'.

Many of the distinguished women featured in the exhibition attended the opening evening.