Most people do one thing. They are a teacher, an insurance broker or a flight attendant. Cairn can't put his finger on what he does. And roaming the workshop he shares with Ian Spencer - under the banner Yard Sale Project - and the studio upstairs, you simply can't tell, the spaces are Aladdin's Caves of tools, machines, wood, drawings, maquettes, half-finished wooden or steel carcasses, ceramic forms, and a cupboard, called Cubrik, that swirls open doubling its size with physical ingenuity impossible to understand.

Clements Yard, the home of Cairn's lair, was derelict when he came across it as an industrial design student twenty years ago. He saw its potential immediately. He squatted at first, but then went on to pretty much rebuild it and its studios with a handful of compadres. Is this architecture or community building?

In making their distinctive multi-layered furniture, Cairn and Ian use a design technique they call "Chaos". Chaos as in the scientific idea of disorder being merely a more complicated form of order. Borrowing from the way nothing in Nature is pure, or perfectly symmetrical, they fashion furniture which seems far closer to Henry Moore's sculptures or neolithic tombs than what mass-production methods have made us used to. A myriad blocks of wood bonded like crystals, and carved into sinuous body-like shapes. The chairs are other worldly. Alien thrones. 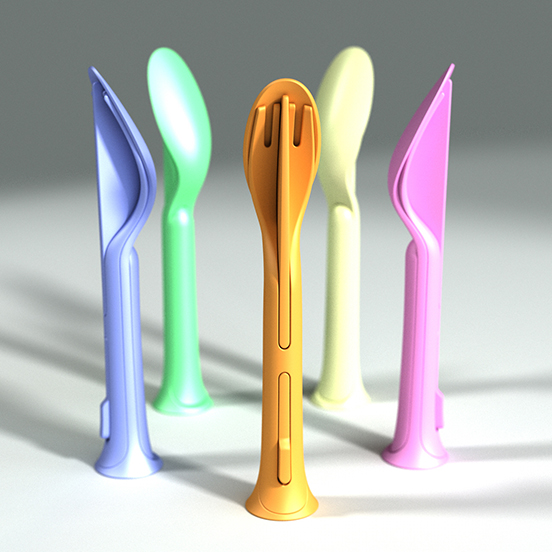 And then there is Cairn's cutlery for Auerhahn, showing that he can be novel within the tightest parameters. My favourite are the spoons, that twist as though they are reaching for that last drop of honey. Or his bowls for Rosenthal, with food cupped safely in the centre, they bloom outwards like flowers.

Although Nature is clearly at the heart of what he does, Cairn doesn't baulk at unnatural finishes, chrome or polycarbonate. What he is doing though, is bending these industrial substances into forms that humanise them, eccentric, unexpected, rhythmic forms.